It is one of the great visions of the Torah. Jacob, alone at night, fleeing from the wrath of Esau, lies down to rest, and sees not a nightmare of fear but an epiphany: “He came to a certain place and stopped for the night because the sun had set. Taking one of the stones there, he put it under his head and lay down to sleep. He had a dream. He saw a ladder resting on the earth, with its top reaching heaven. And behold! There were Angels of G-d going up and down the ladder. And there above it stood G-d.”

What is the meaning of this cryptic Talmudic interpretation? What are these two images? Why were the angels scrutinizing them? The image of Jacob observed by the angels surfaces in the story of Joseph, his son. Joseph, sold as a slave to an Egyptian nobleman, attracts the lustful imagination of his master's wife. She desperately tries to engage Joseph in an immoral relationship. As the union between them was about to materialize, the visage of his father, Jacob, suddenly appeared to Joseph. This caused him to reject the urge and flee outside. What was it about Jacob's visage that inspired Joseph to deny such an intense temptation?

Each of us, the Talmud is suggesting, professes two “images”—two faces, two personalities, two identities, a heavenly image and an earthly one. There is who you are, and who you can be. There is the “you” experienced in your own mind, and the “you” the way it is envisioned by G-d. But only in Jacob were both images one: the image below was an authentic reflection of his image above.

It is here that the Torah is eloquently portraying one of the greatest tragedies of Darwinism: the loss of true self-esteem. 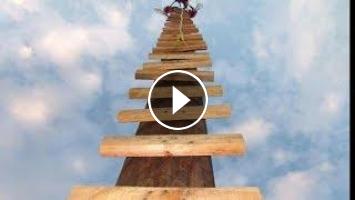 Rabbi YY Jacobson Jacob's Ladder & the Baal Shem Tov's Inferno For Source Sheets: https://www.theyeshiva.net/jewish/148 It is one of the great visions...