Register with E-mail
Facebook Twitter Google
New Essays:
Why men are obligated to light the Chanukah candles? || Modesty or The Holy Scroll

Indecisiveness Is Worse than All

The Talmud relates a story that occurred during the time of the Second’s Temple destruction in 70 CE, and concludes that it was the humility of the sage Reb Zecharya ben Avkilas that was responsible for the destruction of the Temple and the Jewish exile.

It is an enigmatic and disturbing observation—and the class explores five different perspectives on this Talmudic statement.

In yet another strange comments in the Tosefta we learn that the school of Hillel says that the bones and shells are not muktzeh and you may pick them up on Shabbos and discard them. The school of Shammai on the other hand says that you ought not to lift the bones or shells themselves. Rather, you should remove the entire tablecloth and shake off the bones or peels. The Tosefta states that the Talmudic sage Rabbi Zecharia ben Avkilos would act neither according to the school of Shammai nor according to the school of Hillel. He would turn around and with his tongue he would spit out the bones and shells behind the couch upon which he was sitting. The Tosefta then makes a shocking comment: “Rabbi Yosi said, ‘The humility of Rabbi Zecharya ben Avkilos caused the destruction of the Jerusalem Holy Temple!’”

This seems absurd. How can one suggest that since Rabbi Zecharya did not want to take sides in an argument because of his humility—he caused the destruction of the Temple?!

In April 2003, Aron Ralston was climbing in Canyonlands National Park in southeastern Utah when an 800 pound boulder fell on him and pinned his right arm. Aron lay pinned for nearly four days before he ran out of water and decided he needed to take some serious, and very painful, action. He pulled out his trustworthy pocketknife and amputated his own arm from below the elbow. He survived.

Indecisiveness Is Worse than All 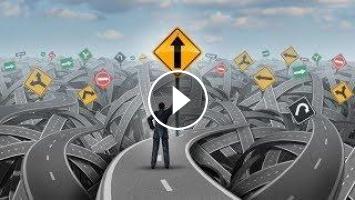