The Seven laws of Noah

http://www.jewsforjudaism.ca • Donate https://www.canadahelps.org/dn/24741 • The Noachide Laws: Judaism teaches that "the righteous of all peoples have a share in the World to Come". Non-Jews do not have to become Jews to become righteous. They only have to embrace the Seven Laws of Noah. According to Torah tradition, God gave Noah and his family seven commandments to observe when he saved them from the flood. These commandments, referred to as the Noachide Commandments or Laws, are learned by tradition but also suggested in Genesis Chapter 9, and are as follows: 1. Not to commit idolatry; 2. Not to commit blasphemy; 3. Not to commit murder; 4. Not to have forbidden sexual relations; 5. Not to commit theft; 6. Not to eat flesh cut from a living animal; 7. To establish courts of justice to punish violators of the other six laws.

These commandments may seem fairly simple and straightforward, and most of them are recognized by most of the world as sound moral principles. But according to the Torah only those Gentiles who observe these laws because God commanded them in His Torah will enjoy life in the World to Come: If they observe them just because they seem reasonable or because they think that God commanded them in some way other than in the Torah, they might as well not obey them so far as a part in the World to Come is concerned.

• JEWS FOR JUDAISM counters Christian missionaries that target Jews, the impact of cults, eastern religions, assimilation & other challenges to Jewish continuity. We strengthen Jewish pride and identity and win back Jews who have been influenced by missionaries & cults. We offer FREE educational programs, materials & counseling that connect Jews to the spiritual depth, beauty, wisdom & truth of Judaism.

The Seven laws of Noah 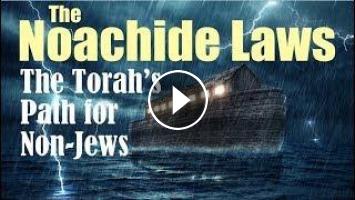