The War of Gog and Magog - Prophecy

“They have roused Me to jealousy with a no-god; they have provoked Me with their vanities, and I will rouse them to jealousy with a no-people; I will provoke them with a vile nation. For a fire is kindled in My nostril, and burneth unto the depths of the nether-world (Sheol), and devoureth the earth with her produce, and setteth ablaze the foundations of the mountains” (Deuteronomy 32:22).

A Rabbi who predicted three wars made chilling North Korea prophecy…and it’s not good. Years before North Korea was known to have nuclear weapons, Rabbi Levi Saadia Nahmani prophesied war between the US and North Korea would spiral into a nuclear apocalypse back in 1994. He based this prediction on the word ‘Sheol,’ which is the Hebrew word for hell, which is spelled the same as the Hebrew word for Seoul, the capital of South Korea. Indeed, as North Korea has increased its weapons testing and missile program, its intentions and capabilities are clear. A nuclear war could very well begin with North Korea attacking Seoul, expanding until it becomes the final war in the end of days.

The doomsday forecast – which many fear is about to come true – was surprising as the Hermit Kingdom had no nukes and was not seen as a threat to anyone but South Korea at the time.

But Rabbi Nahmani warned: “Do you know what will happen, God forbid? Korea!

“Not Syria, not Iran, not Iraq, not Gaddafi.

“And anyone who pays attention to what’s going on in Korea, today, it’s for us – the nukes!”
The Kabbalist soothsayer made the fearsome prophecy in a videotaped sermon on December 12, 1994.

At the time, North Korea was ruled by Kim Jong-il – dad of current leader Kim Jong-un.

The country had signed the Nuclear Non-proliferation Treaty – vowing not to develop nukes – in 1985.

It would not carry out its first nuclear test until 2006 – more than a decade after Rabbi Nahmani’s prediction.

Even then, no one took the threat from North Korea seriously until it claimed to have tested an H-bomb last year.
Now the US has admitted North Korea has an intercontinental ballistic missile (ICBM) capable of delivering a nuclear warhead to mainland America.

Tubby tyrant Kim has threatened to fire a rocket at Guam – a US island in the Pacific between Japan and the Philippines.

Rabbi Nahmani said: “Know that this is worse than the Holocaust.”
The mystic – who died a month after his prophecy – is said to have correctly predicted the Six-Day War and Yom Kippur War – two conflicts between Israel and several Arab nations – as well as the first Iraq War.

But he named Korea as the source of Armageddon for a bizarre reason – the name of the South Korea’s capital.

Seoul – capital city of South Korea – sounds exactly the same as “Sheol” – the Hebrew word for “doom”.
Quoting the Torah – the Jewish holy book – he said: “‘For a fire is kindled in my nostril and burns to the depths of doom.’

“Do you know what is doom?

“It is the capital of Korea.”

Again quoting the Torah, he warned: “‘It will come here and devour the earth with her produce and set ablaze the foundation of the mountains.’”
US president Donald Trump used apocalyptic language, warning Kim Jong-un he faced “fire and fury” if he didn’t stop developing nukes.

China – which has the largest army in the world as well as a stockpile of nukes – has said it would back North Korea if the US attacks.

The War of Gog and Magog - Prophecy 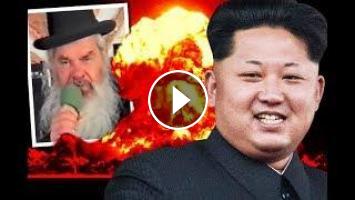 Rabbi Levi Saadia Nahmani “They have roused Me to jealousy with a no-god; they have provoked Me with their vanities, and I will rouse them to je...