There is only one who gets messages from Heaven

The Creator of the world speaks through Mashiach
You'd better believe it
Dear Jews
Soon everyone will be redeemed and will stop suffering
The riots and hatred will stop
Those demonstrations are in vain. It is a waste of money
Eighty percent of the demonstrators are non-Jews
Just baseless hatred
Creator of the world tells you Dear Jews
I have determined what will happen with the
Israeli government, not you
Those who oppose the government and
what is happening now are grinding water
Too bad. Says the Creator of the world.
Too bad for you
The Heart of a King is in the Hand of Hashem
I am - G-d in heave - chose this government
Right wing themselves are making trouble.
They will come to judgment too
120 Kesset members are confused, in conflicts
Only care about their seat, camera and bodyguard
Here we speak the truth!
This is G-d speaking to you, dear Jews
You are his children. He created you
G-d wants you to live an eternal life, build the third temple
G-d wants to stop war in the world,
so there will not be a 3rd world war
There will not be one!
Creator of the world tells the Israeli pilots, Jews
I am doing your job for you in Iran
I will finish off Iran, and you will rest
and only exercise over Israel's skies
It's signed and sealed!
Iran will fade away from the world and will be gone
The explosions and fires will continue every day
If they rest for two days, from this moment on,
More fires will burst, to make up for each day
At this moment-,let it be fire in Iran
Any president or prime minister in the world
who interferes with the Jewish people in Israel
Will simply die. disappear from the world
Any country in the world that disturbs the
Holy Land of Israel will be destroyed
Everything is true, and this is what will happen!
Just be patient
G-d is telling the Jews Mashiach is operating
He is revealed further and further. Every day 200, 2000,
people discover exactly who he is and where he lives
Everything I say here is in the name of G-d.
In honor of G-d. To save you
Everything is pure from the G-d,
in order to save his children
G-d says: Stop lying to people, and con them
Anyone who makes "Hfrashat Hallah",
suddenly becomes a 'messenger'"
Suddenly she knows things
How does she know? Does she talk to demons and ghosts?
No angel from heaven speaks to anyone
(There is) only one who gets messages from heaven
So the Creator of the world explains to the Jews
Because of this generation - this difficult
situation that we're in,
I will release Mashiach – says G-d
I have already released Mashiach last Saturday
Not this Saturday, the one before
Slowly everyone will discover, discover,
discover, and want Mashiach
Everyone will cry out to G-d, asking for Mashiach

There is only one who gets messages from Heaven 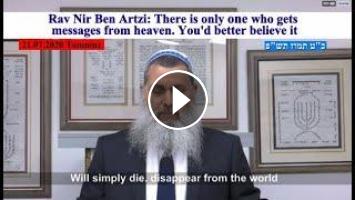 הרב ניר בן ארצי The Creator of the world speaks through Mashiach You'd better believe it Dear Jews Soon everyone will be redeemed and will stop suffer...