InterMarriage - What Can Be Done?

INTERMARRIAGE: What Can Be Done? Recorded July 10, 2001 is Part 1 of the four-part "Meeting Today's Challenges to Jewish Survival".

Rabbi Bentzion Kravitz, based in Los Angeles and Founding Director of Jews for Judaism, International, discusses the painful topic of intermarriage. He notes that the rate of marrying out of the faith has increased almost tenfold in the past 50 years. A serious complication arises from intermarriages is the increased likelihood that that Jewish partner may ultimately embrace their spouse’s religion. “Hebrew Christianity”, “Messianic Judaism” or “Jews for Jesus” is often a very attractive option for couples who are torn between Judaism and Christianity. Missionaries play on the illusion that “Messianic Judaism” offers a unifying bridge between the two faiths.

The essential antidote to prevent intermarriage is to nourish within Jewish people a compelling understanding of what it means to be Jewish. For too many Jews, the answer to the question “Why be Jewish?” remains elusive. Someone who deeply values the positive benefits of living Jewishly will, in all likelihood, seek out a life partner who shares this core commitment. However, for Jews who have already intermarried, the strongest deterrent against converting to Christianity is acquiring a deeper appreciation of the wisdom and beauty of Judaism.

Also see Rabbi Michael Skobac’s lecture, INTERMARRIAGE: Is There Light At The End of The Tunnel?
https://www.youtube.com/watch?v=AHxKvxqs9qs

JEWS FOR JUDAISM is an international organization dedicated to countering the multi-million dollar efforts of Christian missionary groups that target Jews, the impact of cults and eastern religions, and the growing rate of intermarriage that is devastating the Jewish community. JEWS FOR JUDAISM achieves its goal through FREE educational programs, materials and counseling services that connect Jewish people to the spiritual depth, beauty and wisdom of Judaism and keeps Jews Jewish. Please contact us if we can help you. www.jewsforjudaism.ca

InterMarriage - What Can Be Done? 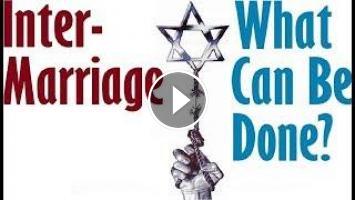 Rabbi Bentzion Kravitz, Director of Jews for Judaism, Los Angeles TO DONATE - https://www.canadahelps.org/dn/24741 INTERMARRIAGE: What Can Be Done? Re...