9 Keys to Tune-Up your Marriage

This half an hour reminder is just that. We all know what it takes to keep a relationship solid. We just need a friendly reminder :)

Rabbi Klatzko has been involved for the past two decades in Jewish activism, staunch support of Israel, and enriching communal life.

A native of Cleveland, Ohio, Rabbi Klatzko received his rabbinic ordination from the prestigious Mir Yeshiva. Rabbi Klatzko then accepted an offer to serve as Rabbi of the historic Agudath Israel synagogue of Brooklyn and Congregation Shaarey Tzedek of Perth Amboy, New Jersey for 10 years.

1999 saw the Klatzko family move to California so that he could accept the position of Campus Rabbi at UCLA. As a love-able ambassador for the Jewish faith, he reconnected literally thousands of young Jewish men and women to their heritage. He also earned the moniker "The Hollywood Rabbi" servicing some of Hollywood's biggest stars and producers, who became regulars at his popular monthly class on Jewish thought.

He currently serves as a National Director of College Outreach and in that capacity oversees and promotes Jewish education and continuity throughout North America. He also lectures at over 50 different North American colleges and universities each year.

Rabbi Klatzko is also a successful author, cantor, music producer, Mohel, and a noted Judaica art collector. His eclectic accomplishments have even earned him the admiration of the United States Congress, where he was honored during a live session of House of Representatives as a "distinguished gentleman making a difference to his community."

Rabbi Klatzko and family currently live in Monsey, New York with his amazing wife, Shani and their 11 children. Shabbat is the Klatzko's specialty, hosting 60 or more people for Shabbos is the norm. He is also the founder of the largest Jewish social network in the world, Shabbat.com.

9 Keys to Tune-Up your Marriage 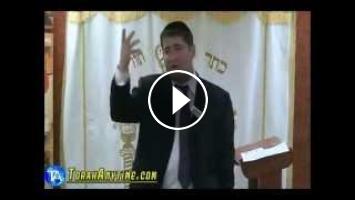 Rabbi Benzion Klatzko This half an hour reminder is just that. We all know what it takes to keep a relationship solid. We just need a friendly reminde...