Register with E-mail
An account on the site lets you do a lot of things.
Find out for yourself. Open an account Today.

When You See a Jew Beaten

Dedicated by Dr. Michael and Liz Muschel in loving memory of her father, Rav Yisroel Yitzchak haLevi ben HaRav Binyamin, who passed away twenty years ago on 11 teves. Rabbi Irving Levy was a respected Talmid Chacham, legendary Baal Chesed, and one of the earliest founders of the Monsey community.

"Moshe" was not his real name. It was an Egyptian name given to him years after his birth. Why was this name chosen by the Torah for the greatest Jewish leader?

Moses was a stepson, or grandson, of Pharaoh. He was raised as a beloved child in the Egyptian palace. The Midrash teaches, that Pharaoh has appointed Moses as the Chief of Staff of the palace. He was being groomed for leadership. In all likelihood, Moses would become Pharaoh’s heir, or at least one of Egypt’s most dominant figures.

Now, if you were in Moses’ position, and you observed a Jew being beaten, what would you have done? Using my rational logic, I might have thought to himself: Stay put. Keep your anger to yourself. Let the Egyptian get away with his crime. These monsters are doing this regularly. You remain the loyal Egyptian prince, dedicated (at least on the outside) to your grandfather, the most powerful person in this country, the Pharaoh. Slowly but surely, climb the ranks. Play the game of politics and diplomacy. Prove your loyalty and efficiency. If you play this game of chess rightly, you might become Pharaoh’s successor. As the next king of Egypt, you will save not one Jew, but three million of them!

Yet, we know the path Moses chose. He didn’t hesitate for a moment, and cut down the life of the SS guard, right there, right then. At that moment he ended the dream: Not only would he not become the king of Egypt; he would become an outlawed fugitive, running for his life.

An experiment in Princeton in 1973, and a forger in France—all capture the central idea of Judaism: Indifference is never an option.
Part of this class is based on various Midrashim and commentators to Shmos, including a talk delivered by the Lubavitcher Rebbe on Motzei Shabbos Parshas Shemos 5740 (1980), and on a class by Rabbi David Fohrman.

Photo: The body of a Jewish prisoner beaten to death by the SS lies in the snow. Mauthausen, Austria, 1943. Credit: United States Holocaust Memorial Museum. 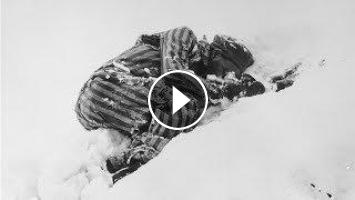