Chanukah and the Secret of Jewish Survival

HANUKKAH - CHANUKAH: and the Secret of Jewish Survival with Rabbi Michael Skobac, Director of Education and Counselling, Jews for Judaism (Canada)

Even though Chanukah is not a Biblical holiday, it is one that is incredibly rich with meaning and significance.

The basic story of Chanukah is simple: around 2300 years ago, Israel was occupied by Syrian/Greek Hellenists who sought to suppress the practice of Judaism. They took over our holy Temple in Jerusalem and turned it into a pagan shrine.

A small group of Priests led a revolt against their mighty occupiers and miraculously routed them. After reclaiming the Temple and cleaning it, they wanted to light the Menorah in the Temple courtyard as was normally done every day. But there was no pure oil to be found. Undeterred, they kept on searching until they found a small jar of pure oil that would last no longer than one day. Miraculously, that oil burned for eight days and they had a chance to acquire a new supply of oil.

This has been the story of Jewish survival throughout history. After tragedies like the holocaust, we refused to give in our give up. Armed with our convictions, we kept going and thrived.

Today, it seems like the Jewish people are being diminished through assimilation and other threats to our continuity. But we can't give up and we don't give up.

One of the messages of Jews for Judaism is that when each of us becomes a Jew for Judaism, and works to help revive our fellow Jews who are not engaged, we never lose. We will not diminish our portion. On the contrary, we ourselves will grow immensely and be blessed through those efforts.

JEWS FOR JUDAISM is an outreach organization whose primary goal is to win back to Judaism those Jews who have been influenced by the following six threats to Jewish survival that are devastating the global Jewish community.

1. Hebrew-Christian missionaries convert thousands of Jews worldwide every year
2. Destructive cults cause many Jews to abandon family, friends and careers
3. Eastern religions, Buddhism and Hinduism are spiritual choices for many Jews
4. Apathy and ignorance leave many Jews unaware, unaffiliated and assimilated
5. Intermarriage is exploding with a 75% rate in some North American cities
6. Anti-Israel BDS on campus inhibits Jewish students from standing up for Israel and Judaism

To assist non-Jews who have left other religions, JEWS FOR JUDAISM also provides educational programs to help them embrace the Torah’s Seven Noachide Laws for Gentiles.

We achieve our goals through our worldwide Internet outreach, Social Media, free educational programs, educational literature and counseling services that connect Jewish people to the spiritual depth, beauty and wisdom of Judaism.

“I am so grateful to have discovered the wonderful Jews for Judaism YouTube lectures by Rabbi Skobac. I am a Jew who converted to Christianity in college, but now, thanks to your online outreach, I have returned to Judaism. Thank you.” – Rebecca G.

In a nutshell, Jews for Judaism saves Jewish lives and keeps Jews Jewish.

PLEASE SUPPORT JEWS FOR JUDAISM’S LIFE-SAVING WORK!
Your help is very much needed and greatly appreciated.
Jews for Judaism never charges for its programs, books and counseling services… ever.
We rely solely on donations from people like you.
To donate click here: https://www.canadahelps.org/dn/24741

Thank you very much.

Chanukah and the Secret of Jewish Survival 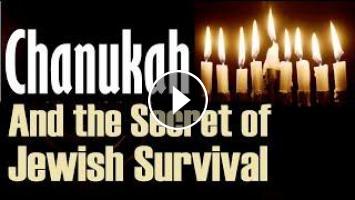