Another call out for "Gedoley Israel"

We never said this before, but now
They ask, from heaven to say it

Because from there, redemption will come
To the people of Israel

Everyone gets visions and dreams,
know exactly what is going on
Hear people talk about it ...

G-g will not postpone things anymore

Maybe it's time for you go see Mashiach,
He is alive, and he is here

Because from there redemption will come
To all 'Am Israel', and it will be the end of suffering

Where are people heading?

Where are people heading? Wake up, dear Jews

We nevert said this before, but now
They ask, from heaven to say it

Everyone gets visions and dreams,
know exactly what is going on
Hear people talk about it ...

And suddenly they disappear

'This is not the time for Mashiach,'

It's not the time? for Mashiach??

Then it's time for what? Money? money, and another house?

Now is the time. The time has come long ago!

You postpone time, G-d will not delay anymore

You know , back then , some of the 'Cohanim Gdolim'?

Would buy Kehuna with money, to become a Cohen
Gadol', entering the "kodesh Kodashim" willing to
die, Just for people to say: "way to go, You went inside

And they were impure

So get confidence and courage

It is not a shame to say that there
is a Massiach in Am Israel, making moves

Shame and disgrace on anyone who doesn't say it

Whoever opposes - oh and woe to him

Because God came to save you from
hell, and to give you life

Enough with pain and illness

Enough with money, and ... everything 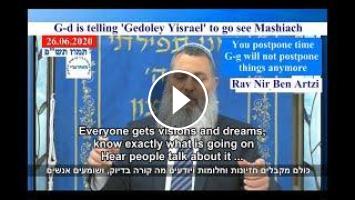