The 16th century Kabbalist, Rabbi Isaac Luria revolutionized the study of Jewish mysticism through Kabbalah. He had the gift to explore the innermost depths of the Zohar. His disciple Rabbi Chaim Vital wrote down his teachings which have come to be known as Lurianic Kabbalah.

Starting from 45 and going to 72 corresponds to starting from the Tiferet, the central sefirah of emotion, and going to the Chochma, the sefirah of wisdom. This is the path of the returning light. According to the Kabbalah teaching, one of our jobs in the world is to clarify it. Clarifying it means transforming the evil we encounter to good. Evil here means a perceived lack of Divine presence. When we are in a situation (which the technical language of the Kabbalah calls a vessel) and think that the Divine is not present, then we need clarification. We accomplish the clarification by thinking, speaking, and doing, in a Torah correct way by which the lack or deficiency that we initially perceived changes to a fullness and completeness. By our virtuous thoughts, speech, and action, the physical world is changed and our consciousness of it is changed. Thus, we have clarified a situation was that "muddy", not clear. 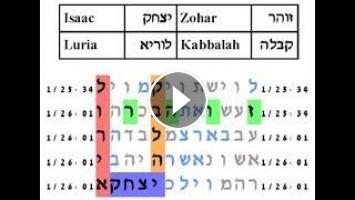 Rabbi GlazersonThe 16th century Kabbalist, Rabbi Isaac Luria revolutionized the study of Jewish mysticism through Kabbalah. He had the gift to explore...