Mr. Gorbachev! Tear Down This Wall


Sometimes there is a difference between the way a word is written in the Torah (and printed in the Chumash), and the way that it is read. The textual spelling is called the “ksiv” and the traditional way we read the word is called the “kri.” As every letter in the Torah is meticulous, dictated by G-d to Moses, these are not merely careless editors’ typos; rather these are two ways to interpret the same word; G-d is essentially saying “Write it like this, but read it like that.” The human body contains 100 trillion cells. Within each cell is a nucleus. Within each nucleus is a double copy of the human genome. Each genome contains 3.1 billion letters of genetic code, enough if transcribed to fill a library of five thousand books. Each cell, in other words, contains a blueprint of the entire body of which it is a part. From a single cell, it may be possible to reconstruct an entire organism. This class will explore not a section from the weekly portion, Behar, not a story recorded in the portion, not a law, a mitzvah, not even a paragraph, a sentence, or even a word in the portion. Rather we will explore a single, solitary letter, a single cell. The class will embark on a fascinating journey upon which we will discover how a single letter in Torah often encapsulates all of history; from a single letter, you can glean philosophical, psychological, sociological and historical perspective. However, in this week’s Portion, Behar, we discover something shocking: The kri and the ksiv—the way the word is written vs. the way it is pronounced—not only have two separate meanings, but they diametrically contradict one another! The Torah is discussing the laws concerning the sale of land in Israel. After the Jewish people entered the land of Israel in 1273 BCE (2488 in the Jewish calendar), Joshua assigned a plot of land to every tribe and family. If a Jew fell upon hard times and was compelled to sell his ancestral field or his home, the Torah gave him the right to “redeem it” from the buyer. The seller would refund the money to the buyer and take his property back. Even if he did not redeem the land, the field would return to the seller automatically with the arrival of the Jubilee (Yovel) year." But there is one exception. If a poor Jew sold his home located within a walled city in the Holy Land. Here the law changes dramatically. This home, the Torah states, could be redeemed only until the first anniversary of the sale. After that it remains the property of the buyer permanently, and did not return to the seller, even with the arrival of the Jubilee year. Even Jubilee could not cancel and reverse the sale; it remains forever in the domain of the buyer. It is here we encounter a stunning discrepancy between the “kri” and the “ksiv,” which captures the defining secret of Jewish history.

Mr. Gorbachev! Tear Down This Wall 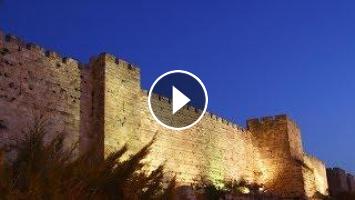 Rabbi YY Jacobson How a Single Letter in the Torah Captures the Story of Five Millennia For Source Sheets: https://www.theyeshiva.net/jewish/110 Somet...