Tattoos in Judaism - What Does the Torah Teach?

Tattooing has become trendy over the past years. Studies reveal that the numbers of younger people getting tattooed is steadily growing. This video explores the phenomenon of tattoos and the perspective of Judaism. The Torah does prohibit tattoos, but how exactly is the prohibition defined? What are some of the reasons given for forbidding tattoos? And what about removing tattoos - are there ways that are more preferable?

JEWS FOR JUDAISM is an outreach organization whose primary goal is to win back to Judaism those Jews who have been influenced by the following six threats to Jewish survival that are devastating the global Jewish community.

1. Hebrew-Christian missionaries convert thousands of Jews worldwide every year
2. Destructive cults cause many Jews to abandon family, friends and careers
3. Eastern religions, Buddhism and Hinduism are spiritual choices for many Jews
4. Apathy and ignorance leave many Jews unaware, unaffiliated and assimilated
5. Intermarriage is exploding with a 75% rate in some North American cities
6. Anti-Israel BDS on campus inhibits Jewish students from standing up for Israel and Judaism

To assist non-Jews who have left other religions, JEWS FOR JUDAISM also provides educational programs to help them embrace the Torah’s Seven Noachide Laws for Gentiles.

We achieve our goals through our worldwide Internet outreach, Social Media, free educational programs, educational literature and counseling services that connect Jewish people to the spiritual depth, beauty and wisdom of Judaism.

“I am so grateful to have discovered the wonderful Jews for Judaism YouTube lectures by Rabbi Skobac. I am a Jew who converted to Christianity in college, but now, thanks to your online outreach, I have returned to Judaism. Thank you.” – Rebecca G.

In a nutshell, Jews for Judaism saves Jewish lives and keeps Jews Jewish.

PLEASE SUPPORT JEWS FOR JUDAISM’S LIFE-SAVING WORK!
Your help is very much needed and greatly appreciated.
Jews for Judaism never charges for its programs, books and counseling services… ever.
We rely solely on donations from people like you.
To donate click here: https://www.canadahelps.org/dn/24741

Thank you very much.

Tattoos in Judaism - What Does the Torah Teach? 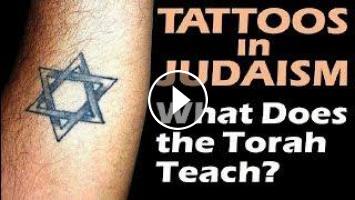 Rabbi Michael Skobac Tattooing has become trendy over the past years. Studies reveal that the numbers of younger people getting tattooed is steadily g...